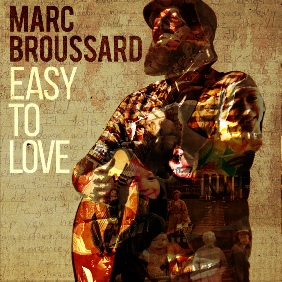 If the first two songs from Marc Broussard’s upcoming album are any representation, the Carencro singer-songwriter grows more soulful every day.

Due Sept. 15, “Easy to Love” follows albums Broussard made for major labels Island and Atlantic and the independent imprint Vanguard. Last year he released his first independent release on his own label with “SOS-Save Our Soul 2 “

Broussard premiered “Easy to Love” track “Send Me a Sign” online in late July. The heartfelt piano ballad is another reminder that Broussard, a Cajun raised on soul, rhythm-and-blues and swamp pop, has earned a place alongside such neo-soul stars as John Legend and Maxwell.

Broussard co-wrote “Send Me a Sign” a decade ago with his longtime drummer Joe Stark. The collaboration began when Broussard sent Stark a music track via email. Stark replied with lyrics he’d just written, inspired by the death of a friend. Broussard responded to the verse and chorus Stark composed by adding a second verse and a bridge.

Broussard brought “Send Me a Sign” into recording studios many times through the years but wasn’t satisfied with the results until he recorded the version on the “Easy to Love” album.

“Don’t Be Afraid to Call Me,” another richly emotional track on the new album, premiered online in mid-July. As always, Broussard based the lyrics on own his life. If a song is to mean something to the artist and the audience, there’s no other way to do it, he said.

“ 'Don’t Be Afraid to Call Me’ came from a real place,” he said in his swampy baritone. “A lot of us can relate to a sentiment like that, where you’ve lost touch with somebody for one reason or another, or simply grown apart. Sometimes our memory turns to them and we wish they might find the courage to call, especially if they need us.”

In the same spirit, “Anybody Out There” addresses homelessness from the perspective of a someone living on the streets. “It’s just a call, wondering if anybody is out there,” Broussard said. “And there’s a song called ‘Wounded Hearts.’ The lyrics ask, ‘Where do the wounded hearts belong? Somewhere for those without a home, because everybody knows what it’s like to be alone, holding it together when you’re barely hanging on.’ ”

Broussard co-wrote most of the “Easy to Love” album with Chad Gilmore, one of his band members, and the album’s Los Angeles-based co-producer, Jim McGorman. Words and music came quickly during the few days in a rented house in Carmel, California.

“We were on tour last fall and we had a couple of days off,” Broussard recalled. “Jim lives in L.A, so he came up the coast with us. We set up in a great house for two days and wrote like the dickens, nonstop.”

Originally, Broussard planned to pitch the songs written in Carmel to TV and film music supervisors. While licensing the new material is always a possibility, the singer decided to feature the songs on an album.

“If we were going to record original material that I felt really good about, I thought we might as well get a new record out of the deal,” he explained.

A few more songs were recorded to complete the project. They include reimagined renditions of Marvin Gaye’s “Mercy Mercy Me (The Ecology),” the Pretenders’ anthem “I’ll Stand by You” and a song written and originally recorded by Scottish singer Frankie Miller, “Baton Rouge.”

“All the covers are different spins on the originals,” Broussard said. “Unlike the way I’ve approached the soul covers on my ‘S.O.S.: Save Our Soul’ albums, where we recreated the original tracks, we totally reinterpret these songs.”

For instance, for "I’ll Stand by You,” Broussard said, “We put it in a pocket (beat), put some gospel vocals on it and have a lot of fun. A few times we do really deep grooves on this album.”

Broussard’s gift for writing and performing songs that heal and inspire dominates “Easy to Love,” but the project also features lighthearted pieces.

”Some tunes are there just for fun,” he said. “There’s a song called ‘Rosé All Day’ that’s just about having a good old time.”

“After years of trying, I've finally wrote one for my youngest. I can't help but think of my children when I sing it. The song is testament to the knowledge all parents have that, one day, our children are going to fly the nest and the advice we, as parents, give them for that flight.”

Marc is performing live in Zoetermeer on the 10th of June. 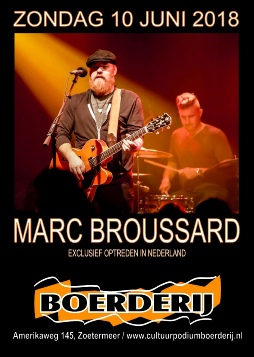