Year Of the Flood DVD 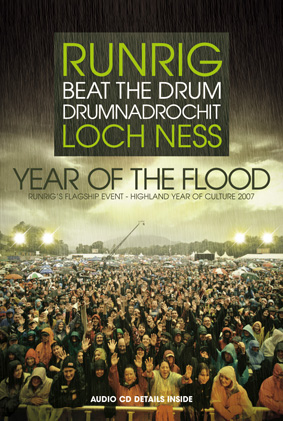 Runrig and Ridge Records are delighted to announce the release of Year Of The Flood, the long awaited DVD of the Beat The Drum concert, filmed at Drumnadrochit, Loch Ness on 18 August 2007. Year Of The Flood will bring back many memories of an unforgettable day when a sell-out audience of 18,000 people gathered to celebrate the band’s flagship event of Highland Year Of Culture 2007. It was to prove to be the wettest day for the area in living memory. A day of music and celebration – a day of relentless deluge - an event that none present would ever forget!

The film attempts to capture it all, just as it was – the mud, the rain, the music, the Highlands, and ultimately, the ‘never say die’ spirit of a remarkable audience that saw it through to the end, as only a Runrig audience could.
PLAYING TIME: 1 HR 50 min. 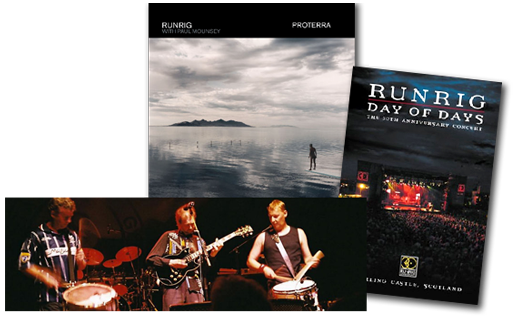 The Proterra project has been undertaken in the light of both recognising Runrig's 30th anniversary year, and of defining where the band now stand musically and culturally. The initial remit for the project was that of a cinematic and loose thematic approach, veering away somewhat from the usual song based album.

To help gel this aspiration, the band brought on board the services of the Brazil based Scottish musician, Paul Mounsey. Paul has a keen command of the Gaelic musical mosaic and has integrated elements of this tradition into his own dance and groove based albums. Having already worked with the band on the track, Running to the Light, on the Stamping Ground album, it was decided to take the relationship a stage further.

The Latin title Proterra, (for the land) was taken from the Celtic myth or legend that traced the origin of the Clan Donald clan crest. The crest is that of an upright severed arm, and the motto reads Per Mara, Per Terras (by land and sea.) In the legend two sons of the chief were given the opportunity to become successor to the chief and Lord of the Isles. The isles being virgin territory that the clan was now claiming, and this new Lordship would be the start of a dynasty. The decision rested on a rowing race between the two sons and their respective oarsmen. The victor would be the one to first touch the new land. The galleys rowed neck and neck until close to the shore, when one brother pulled slightly ahead and was going on to claim his prize. Before he touched the land, the other brother drew his sword, severed off his own arm and threw it onto the land. He then became the eventual victor.

The story within the album became a metaphor for the struggle that the Scottish Celtic peoples have experienced from the dawn of recorded history to the present day for the land on which they live. The story is a universal one, as the elements of land and sea are pivotal for the survival of any maritime civilisation. Paul Mounsey is closely associated with displaced landless peoples in South America, and his own music has reflected this.

As well as new material from Calum and Rory, Bruce has contributed a song and collaborated with Malcolm and Rory and Calum on others. There is an instrumental from Malcolm and the album ends with another instrumental Angels from the Ashes, written by Runrig founder member, Blair Douglas. One of two tracks on the CD inspired by the events of 9/11, the other being the song There's a Need.

Again with a view to the 30th year, Paul Mounsey went back to the band's seminal Recovery album and re-arranged two tracks, The Old Boys and An Toll Dubh to fit the mood and atmosphere of the Proterra project.

The album could be viewed as the new Recovery, it contains 13 tracks, at times firmly rooted in the Runrig tradition and at times going somewhere musically new and experimental. Throughout, it is always true to the spiritual heart of the band.