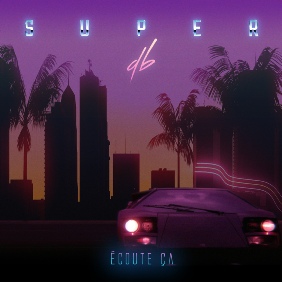 Super db are a 4-piece band from London. The band’s name plays on the positive, upbeat nature of their music, as well as encompassing the initials of each band member.

Super db’s sound is a distinctive blend of Pop, Disco, Funk, Rock and Jazz. The members consist of some of the UK’s top musicians, most of them multi-instrumentalists offering more than just one musical contribution to their band recordings, including rotating lead vocalists.

J-M, J-P and Lorenzo all met while studying Jazz at Trinity College of Music in London. Matt also studied in London at Guildhall School of Music around the same time, but the four were introduced through a mutual friend and began working together for the first time on Matt’s solo album ‘Around the Corner’ in 2013. Their recording and performance synergy was the catalyst for them to officially form Super db in 2014.

All four band members are proficient composers, not only writing songs for Super db, but individually for other projects too. J-P has released two solo albums and along with J-M, has released two albums as ‘The Sutcliffe Brothers’, exploring their passion for ‘80s rock and progressive rock. J-P also forms half of the dance music duo ‘Warcliffe’. Bass player Lorenzo has played on numerous Jazz and Pop records, and has recently completed a MA in composition at Trinity College of Music, and is now working as a commercial music composer, providing music for TV shows on Rai 3 in Italy. Matt has released numerous solo albums, both in band format and as a solo pianist, as well as working and recording with Italian guitarist Fabio Zambelli.

Through the release of their debut album 'Death by Disco’, Super db started to gather an underground following capturing fans and lovers of the classic songs and sounds harking back to the late 70s and early 80s, reminiscent of the likes of Earth Wind & Fire, Prince, Daft Punk and others.

Their song 'The Best In Me' was selected to be featured on a Warner Music compilation album titled 'California Groove IV' which was released in June 2018. Radio plays including those from across the USA followed.

This momentum and increased support for the band urged them to work on completing new music to present to the world officially for the first time, with a promotional and marketing team’s support.

The single ‘Kool Funk’ reached #2 on the UK Soul Chart in June and July 2020. It also achieved international radio play on numerous stations including BBC, Solar, Delite and Mi-Soul. The single ‘Open Line To Me’ (released in October 2020), was equally well received, going on to be voted ‘People’s Choice Champion’ on BBC Radio Essex and other BBC local radio stations for a record four weeks on John Leech’s show.

The band released the taster EP ‘Listen To This’ in 2017, and have recently finished recording and mixing their second album ‘Ecoute Ca’ which is to be released this summer, with much anticipation from fans and media alike.

In May 2021, Super db sadly announced the untimely and sudden death of their much loved founding member, Matt Dibble. In Matt’s honour, the remaining band members continue to be dedicated to sharing and promoting the music they made together and vitally shall maintain the positive vibes and lust for life that Matt always brought to the project and life in general. ‘Ecoute Ca’ represents everything that 4 piece loved to create as a unit and its release is now as significant as ever.

‘London-based Super db caught our ears with their stylish fusion of disco and funk on their new single "Open Line To Me."..The four piece marries a plethora of genres in such an effortless manner.

From the rollicking guitar riffs, warm throbbing basslines, and a vocal style reminiscent of luminaries such as Kool & the Gang et al, the band truly showcase their stuff on this smooth laidback jam. The vocal performance is truly magnificent and dynamic too as the band display ranges from high to low as the song progresses. With regard to songwriting, they also tap into the 80s era with references to phone lines in a retro-fitted manner allowing the modern touch to also shine through.’

‘Two of the most excellent singles from 2020’, ‘Simply great songs...real blue-eyed soul, 70s, yacht rock feel about them’