An Invitation To Shangri La

The dynamic musical duo of Andy Platts and Shawn Lee return as Young Gun Silver Fox with their incredible new album Ticket To Shangri-La, released on October 21st via Go! Entertainment. The uplifting first single from the album ‘West Side Jet’ already hitting the Benelux airwaves for more than 2 months now and the new single “Rolling Back” will be out September 23rd.

Andy Platts and Shawn Lee need no introduction, having each clocked up a life time of musical brownie points, whether through Andy’s career as a world renowned composer and  singer/songwriter/guitarist with British soul sensations Mamas Gun or through Shawn’s esteemed work as a producer, multi-instrumentalist and composer which has placed him at the forefront of the global soul and funk community.

The duo’s fourth studio album, Ticket To Shangri La showcases a band at the very top of their game, fine-tuning their potent brew of sun-kissed pop-soul, west coast AOR and natural groove with a skill for composition and production that sees them forging ahead down a musical highway blessed with blue skies and positive vibrations. For both participants, the chance to make a new record together is always a liberating experience, as Andy explains; “I always come back to Young Gun Silver Fox like taking a drive to the coast and I just smell the ocean and the air and it’s like ‘wicked I’m back here again’ and I can just kick back and enjoy it.”

Key for Shawn when it came to starting the creative process for the new record (the follow up to 2020’s Canyons) was taking their already skilled approach to writing and recording and adding something new to the mix. “We have a sound and a language that we’ve cultivated that sounds like Young Gun Silver Fox, and these things are great but they can be a double-edged sword because you think ‘well nobody wants to make the same thing over and over’,  so you need to find ways to move forward and do something you haven’t done before.  I was thinking we have a lot of mid-tempo stuff, so I started thinking if we had some bangers and some more up-tempo stuff that would be great and would add to the canon, and so I concentrated on delivering a few things like that.”

This self-imposed mandate to up the groove factor is born out in the album’s first half and exemplified in the uplifting four to the floor and sky-high chorus of lead single ‘West Side Jet’, which started life in Shawn’s London studio and became an instant contender as the first introduction to the album. “When Andy sent me the vocals I was honestly like ‘this is the first single!’ We hadn’t even finished the album yet but it was instant.”

“Lyrically I knew I didn’t want to do anything romantic,” expands Andy, “it can’t be about the dancefloor it can’t be ‘I love you, break my heart’ etc. it needed to be something different. The only musical I really like is West Side Story and I’d watched the original again recently so it’d come back into my consciousness just how brilliant the music and writing was, so it was just a bit of a nod to my fondness of that as a piece of culture.”

It’s swiftly followed by the FM funk brilliance of ‘Tip Of The Flame’, with Shawn’s nailed on groove and Andy’s soaring vocal turn guaranteed to invoke moods of joy, not least in its writers. “That track was just winning,” enthuses Shawn, “it just had a groove so I knew that was gonna be great when Andy got on it. The vocals are so good on it, he’s just singing his ass off on a whole ‘nutha level.”

“I was trying to fuse Tears For Fears or Prefab Sprout with an ’80s soul thing which was an interesting experiment” explains Andy when discussing ‘Rolling Back’, which takes no prisoners with its chorus-to-die-for and highlights his masterful understanding of an uplifting melody, fusing it to a deep groove that you can imagine lighting up the airwaves of a fictional long lost pacific coast radio station. “I wrote and tracked it from the ground up and then Shawn replaced the drums on it as he’s a master drummer. Shawn embellishes and adds his sugar which always elevates it to another level and that’s where Shawn’s magic and deserved role as producer of the records we make is earned, because he really knows how to make a record.”

Set amongst endless high points, If proof were needed of just how much Young Gun Silver Fox have mastered their art then look no further than ‘Sierra Nights’, a stunningly evocative, kaleidoscopic sunset of a tune whose lyrical genesis came from Andy’s lockdown reading matter. “It’s one of the most favourite things I’ve done. Musically I was just trying to reach into that west coast acoustic sound, but one of the things that sent me there was one of my lockdown reads which was Don Quixote, and it’s all there in the lyrics which are about Don Quixote and Sancho. I was just really trying to paint a picture of their friendship and their struggle set amongst this vast wilderness and each one having each other’s back. I did kind of think of me and Shawn in there as well, it’s just the two of us against the world really.” “When he sent me that track I was almost dumbfounded,” adds Shawn. “It was so instantly evocative and atmospheric that it pulled me into a world. It felt so different from anything we’d done before but I thought it was something really, really special.

Dropping on October 21st but guaranteed to generate some rays of winter sun, the chemistry and craftmanship on Ticket To Shangri La means that Young Gun Silver Fox do exactly as the title suggests, transporting the listener to a magical, mythical world of sunshine and good vibes, a musical and spiritual ethos born from the minds of two gifted musicians that stands as the embodiment of all they do best, whilst providing the perfect invitation into their unique world. 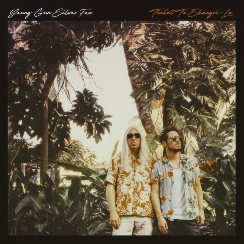