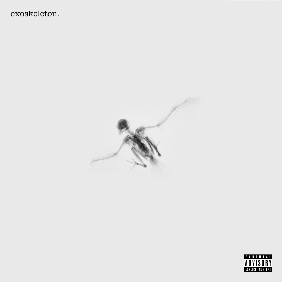 In August 2017 everything - from the outside at least - seemed to be going according to plan for then-indie/punk/rock startlets VANT. Five consecutive ‘BBC R1 Hottest Record(s) In The World’, a critically acclaimed debut album under their belts and a summer spent on the main stages of festivals including Governor’s Ball, Lollapalooza and Reading & Leeds. Meanwhile, frontman Mattie Vant, was quietly planning his own demise.

“Turns out I’m not particularly good at sticking to anything for too long”.

Navigating the current socio-political climate is difficult enough without the added uncertainty of how long you can continue doing the thing you love. “I took a massive risk,” Mattie continues. “I had to relearn everything I ever knew about song-writing and I’m only now just starting to touch on my best work. There’s a long way to go.

“If I had wanted to keep making straight-up, ballsy rock music for the rest of my life, I could have kept that incarnation of VANT going forever. Once I stumbled upon the song ‘Propaganda Machine,’ I knew there was no turning back and that I’d have to start from the bottom, prove myself once again”.

VANT started as a solo project for Mattie way back in 2014. After writing an album’s worth of material he put a band together to record some demos and begin the live journey that would end on the biggest stages of the UK festival circuit just a few years later.

“I honestly believe we peaked, there was no way we’d have been able to sustain the heights we got to moving into a second record of a similar ilk. Those guys are amazing musicians, they’ll go on to do great things in their own right and they were vital to the sound of that first album.

“I started moving in a different direction. I realised I had to look elsewhere to evolve. It’d be great to play with them all again at some point in the future.”

After the band’s last tour, Mattie spent the following winter and spring in the studio, experimenting with every new instrument or bit of software he could get his hands on. A chance meeting with an old friend - Jamie Reed (Partybaby) - in Mattie’s home city of London led to a late-night collaboration, which escalated into a summer spent in LA.

“Something clicked when I worked with Jamie. We were both questioning the current state of rock music and wondering how we could move the genre forward.” More songs emerged from his work with Jamie and fellow Partybaby band-mate Noah Gersh, and one in particular – ‘Exoskeleton’ - became the nucleus for the album.

“‘Exoskeleton’ is the best song I’ve ever been a part of writing,” beams Mattie. “It’s a song I can imagine people listening to on repeat, until it becomes torturous.” Further sessions in LA were a mixed bag, leaving Mattie confused but encouraged. On his return to the UK, he linked up with long time producer, Sam Miller to begin collating the pieces of what would become VANT’s second record; ‘Conceived In The Sky.’

“This was always going to be a transitional record for me. Returning to being a solo artist, exploring different genres, essentially completely reinventing myself, all as a newly independent artist.” Conceived In The Sky will be released on Mattie’s own imprint Dumb Blood Records (date TBC). “Some of my favourite records are those that ‘join the dots.’ You can see where an artist is going but they are still discovering themselves and playing with new ideas, without the weight of expectation.

“There is something beautiful and exciting about stretching out into the unknown and it’s only when you finally reach that solid ground that you can look back and see how far you’ve come.” And where’s Mattie right now? “Well, my ship sank and I’ve just about cobbled together a raft!” Here’s to being lost at sea but ‘Conceived In The Sky.’

“VANT have ensured their music has the same capacity to move and intrigue as their subject matter.” **** - Q

“A voice that doesn’t just want to speak, but needs to connect with an audience young enough to still make a difference.” **** – Dork

After a one year hiatus VANT emerge from the unknown with a reinvigorated sound. 'exoskeleton' (out now) is the first rumbling to mark the new era.

Mattie Vant sheds some light: "3 years ago I wrote some songs, put a band together, went out, played lots of shows and met some incredible people. I went missing for a while, I got a little lost and I'm not really sure if I've 'found' myself or for that matter if I ever truly will. What I do know is, I've written some new songs, put a band together and soon, I will go out and play lots of shows in the hope of finding more incredible people and maybe, one day, myself."