The life and Soul 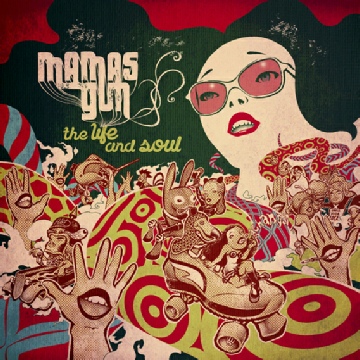 Mamas Gun’s debut album Routes To Riches  - released late 2009 and co-produced by the band and Julian Simmons (Guillemots) - combined the euphoria of soul and Motown with the spirit of Stevie Wonder, Marvin Gaye, Lewis Taylor and the Average White Band. Indeed, Uncut proclaimed it “a master-class in blue-eyed bubblegum soul, as heartwarmingly catchy as anything from Stevie Wonder's '70s purple patch” whilst Billboard offered "a kaleidoscope of a record that travels through genres.” The Sunday Times went even further comparing it to Stevie Wonder’s early 1970s sound and suggesting you could hear “snatches of Marvin Gaye, Shuggie Otis, Sly Stone, and George Clinton, as well as a smattering of blue-eyed soul influences, including Hall & Oates on Chasing Down Shadows and Wishing, and pop-soul period Todd Rundgren on Pots of Gold.” A rare treat you might think but it was the band’s huge impact in Japan that really made the world sit up and take note: Mamas Gun were heralded as the most played international act in the country that year (beating Madonna to the No. 1 airplay slot), also achieving the No.3 sales slot on the Japanese Billboard charts.

Tours with De La Soul, Raphael Saadiq, Taio Cruz and Beverley Knight quickly followed and saw the band play to tens of thousands fans worldwide whilst a new record, The Life & Soul, categorically cements the band’s place as “most likely to” contenders.

The new album, produced by Grammy Award winning production team Martin Terefe and Andreas Olsson (named in the Top Ten best pop producers by Billboard this year and noted for success with artists such as Jason Mraz, Train, James Morrison, KT Tunstall and Jamie Cullum), is a revelation in that it borrows a myriad of identifiable influences and yet seems to inhabit a world all of its own.

Mamas Gun’s success in Japan may or may not have had something to do with front-man Andy Platts South East Asian origins – he was born in a Kowloon military hospital to a nomadic father who’d landed in the Far East as a police recruit in their battles with underground triad organizations – but success elsewhere has surely come down to the canniness of the band themselves.

In Germany, the band appeared on TV impressing the manager of Die Fantastishen 4 (a kind of hip-hop Beatles, who have sold millions in Germany) so much that he asked them to open for them at their 25th anniversary concert in Stuttgart (in front of 60,000 people), then cover one of their tracks on a tribute album that went on to chart at No 2.

The collaborations continued in Hong Kong where Mamas Gun recorded their own version of a huge Jackie Cheung hit re-titling it Yesterday’s News (it reached No 1 in the Hong Kong radio charts), whilst in Holland the band gained some notoriety when they recorded a Mamas Gun style cover of Cee Lo’s ‘Forget You’ for that country’s biggest radio show (akin to Jo Whileys live Lounge sessions).

Interestingly the tables are now turning with plans for one of France’s biggest acts – Tete – to guest on a Mamas Gun track & Japanese girl-band R.E.S.P.E.C.T also releasing their own version of a Mama Gun song (‘Finger On It) this year also.

It’s not too much to say that this unique approach to conquering territories far removed from their own has made the band friends all over the world & enabled them to take their own music to a global scale not always achieved by even some of the biggest UK acts.

Mamas Gun are a five-piece fronted by the singer, composer and producer Andy Platts but they are by no means a one man operation. Bassist ‘Professor’ Rex Horan, another focal point of the band’s feisty stage show, was born in the Western Australian desert and is equally adept on violin and piano and in classical music. Keyboard player Dave ‘Eighties’ Oliver’s musical education, originally in Hertfordshire, embraced everything from barbershop singing to French horn and now includes jazz, soul and Cuban playing. Guitarist Terry ‘Spiller’ Lewis studied music in Essex, got his diploma and taught guitar before honing his craft by working with the likes of Curtis Mayfield and Leon Ware. And ‘Union’ Jack Pollitt notably played drums on ‘Green Light’ for Beyoncé’s ‘B-Day’ album, with producer Pharrell Williams.

Lead Singer and songwriter Platts, who attended Liverpool’s LIPA institute before playing on Corinne Bailey Rae’s debut album and writing with Rod ‘Thriller’ Temperton, John Oates, Jed Leiber and former Gil Scott-Heron collaborator Brian Jackson, suggests that The Life & Soul has more of a rock edge and is more melody driven than its predecessor. “Sonically, the first record was a collage of everything I had written up to that point”, he says. “And it took six months to record. This one we used the same set up for every song and recorded it all in one room. It took two months to write and five weeks to record.”

Platts is right about the rock element as opener Reconnection (a song about the after life and “reconnecting with your loved ones” and a play on the word reincarnation) testifies. The song is almost Queen-like in its ambition, a fact that didn’t escape the band when they were recording it: (Mamas Gun cite Queen as a huge influence having recently recorded a version of the glam-prog quartet’s Bicycle Race)  - and they sent the track to Brian May who loved it and offered to collaborate with the band later this year.

Love in all its (re)incarnations is an abiding theme on The Life & Soul: Only One, co-written by and featuring Beverley Knight, is about Knight’s brother and the girl he’d always wanted to be with; focus track On A String which recalls the bright-eyed soul of James and Bobby Purify’s I’m Your Puppet, is about serendipity or at least knowing that if you bumped into someone for a second time you’d be helpless to her whim; We Make It Look So Easy is about finding the right one; and best of all is Sending You A Message which tells the story of his Grandparents, a doctor and nurse, who were separated during the Second World War and found themselves only able to communicate via telegram.

Elsewhere on The Life & Soul the writing remains reassuringly enigmatic; the apocalyptic Inferno takes its inspiration from a song on Jeff Buckley’s Sketches For My Sweetheart The Drunk album and is, according to Platts, about “setting things in motion which become inevitable”; Rocket To The Moon (co-written with bass player Horan) has a James Brown/Stevie Wonder/Michael Jackson edge to it and the be-careful-what-you-wish-for sentiment is only magnified by the imagery of revellers dancing in a spacecraft that this song surely conjures up; Heavy Hands - a co-write with Ellie Goulding’s Starry Eyed writer Jonny Latimer that features a lovely metaphor about “climbing ladders in the rain” -concerns someone with an insane amount of optimism, this contrasting with Platts’ own cynical view on life; and the magnificent composition The Art which speculates on death and what it must it feel like to lose someone close.

The Life & Soul moves the goalposts on what one expects from a contemporary record these days. Lyrically its leaps and bounds above its predecessor and musically it has a cohesion that Routes To Riches possibly lacked – a testament to the 5-piece’s 3 years of hard touring and possibly something to do with the fact that you throw your life and soul and everything but the kitchen sink into your first record and maybe just a little bit less of that into your second.

It’s ironic to note then that The Life & Soul is actually the record they’ve always threatened to make - a sonically-rich rock, soul and funk masterpiece that people will be playing for years.